If you have followed my research on the infamous CVE-2017-0199 zero-day attack, you may know we (w/ my colleague Bing) did a presentation titled “Moniker Magic: Running Scripts Directly in Microsoft Office” at the SYSCAN360 security conference on May 31th in Seattle, WA. The slides are available at https://sites.google.com/site/zerodayresearch/Moniker_Magic_final.pdf. During the presentation, we explained the background of the CVE-2017-0199 (there’re actually 2 bugs/variants under the same CVE-ID, including the “secret” one that was reported by myself in January), the root cause of the two vulnerabilities, as well as how Microsoft addressed them.

The Microsoft patch actually leverages a mechanism on the Windows level, which is called "COM Activation Filter". The patch filters out 2 dangerous CLSIDs (a CLSID is an identifier of a COM object) leveraged in the 2 variants, respectively. However, the whole "features" aren't changed at all. It means that if someone finds another (the 3rd) dangerous COM object, with some modifications of the original PoC, he/she is able to achieve remote code execution once again. We expressed our concerns at the conference as well as during personal conversations with Microsoft security folks.

The story didn't end there, in fact, there's indeed such a variant, it's reported to Microsoft just on the day before our presentation (May 30), I have kept the secret during the conference (sorry for the infosec friends:-)). As the new patch has been released on Patch Tuesday last week, let’s talk about it.

If you haven't applied the new patch yet, you're highly recommended to do so right now.

The new variant leverages the Composite Moniker. According to MSDN,

"A composite moniker is a moniker that is a composition of other monikers and can determine the relation between the parts. This lets you assemble the complete path to an object given two or more monikers that are the equivalent of partial paths."

The following picture shows the stream of the Composite Moniker used in our PoC.

When we put the sample test.sct file as we used in our “PPSX Script Moniker” bug (see our slide 30) in the right place (here we put it on the “C:\temp\test.sct” on local machine, but it could be put on remote computer via various protocols such as SMB share), and ran the modified RTF file, we got a beautiful calc.exe popping up on the latest Windows 10 + Office 2016 environment (before the July Patch Tuesday, of course). 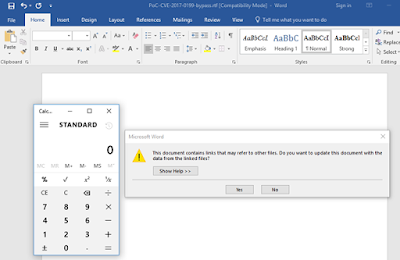 When binding the “new” Moniker, it obtains the left-side moniker via the “pmkToLeft” parameter. In this case, the left-side Moniker is the File Moniker. So, it uses the File Moniker to initialize an object determined by the extension name ".sct". If we look into our Windows Registry, we could easily figure out the CLSID of the object is "{06290BD2-48AA-11D2-8432-006008C3FBFC}", progid is "scriptletfile". So the "scriptletfile" object is created and initialized by the content of the test.sct. This is a typical File Moniker binding process.

So, in an easier-to-understand “script” language, the logic looks like the following:

Here is the call stack when calc.exe is being popped up, note the highlighted key functions.

Why it bypassed Microsoft's patch?

As we explained in our presentation, the Microsoft's April Patch banned two objects in Office, they are:

There's some of my personal thoughts around this, the first is absolutely this new variant strongly demonstrates this is an “open” attack surface, and Microsoft's work wasn’t done very well. While I prefer not to judge Microsoft's patching strategy why they didn’t touch the features as they may have their own considerations (compatibility, user experience, etc), it's a clear proof that the patching strategy is weak, or weaker than I expected. The patching strategy is very similar to the ActiveX "killbit" solution when in the old days ActiveX vulnerabilities were very popular. It's an "easy fix" - people find a vulnerable object, we kill the it, people find another, we kill another, easy but not proactive, I'd say.

Also, it's the reason why I personally prefer to say the "RTF URL Moniker" issue, the "PPSX Script Moniker" issue, and this one, are separated bugs and should be assigned with different CVE-IDs (though Microsoft has assigned a new CVE-ID, CVE-2017-8570, for this variant). Microsoft putting them under a same CVE has caused confusions - we didn't assign all the ActiveX vulnerabilities as one CVE-ID, right?